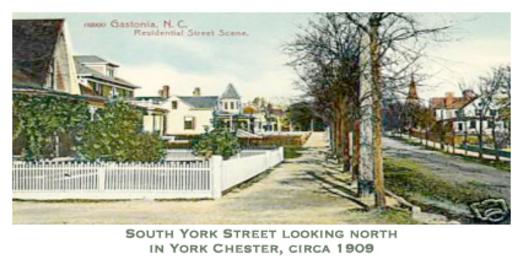 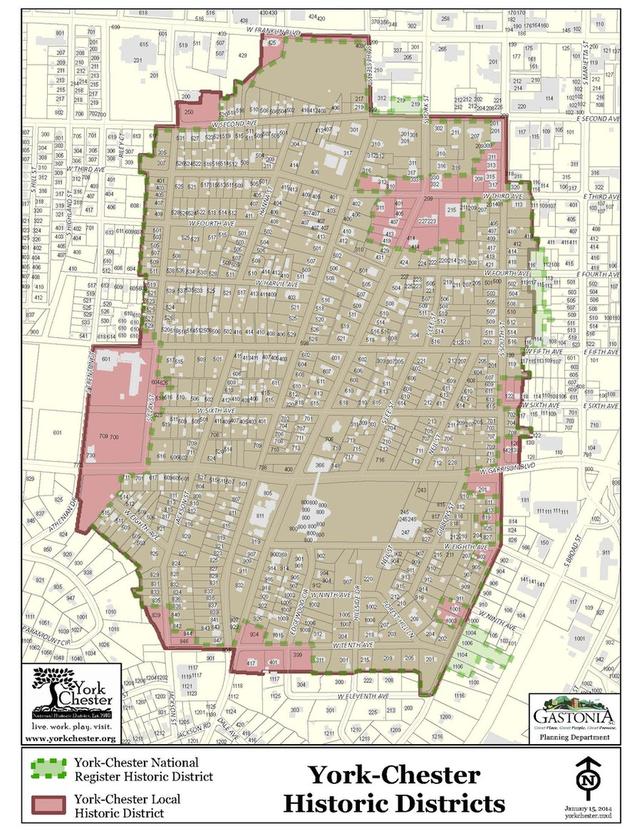 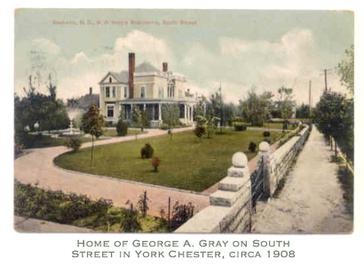 York Chester was developed as Gastonia’s first residential neighborhood in the late 19th century and was home to many of the prominent citizens of Gastonia. Mill, mercantile and business owners along with other professional occupations were the early residents, often building large and ornate homes typical of the late Victorian and early 20th century styles. An example is the home of George A. Gray, a mill owner, featured in the postcard view. Sadly, many of these structures did not survive the growth of the adjacent downtown area as it pushed into the northern boundaries of York Chester. York Chester received its name from the two major north and south thoroughfares through the neighborhood – York and Chester streets.

These streets were so named as they came together further south of the neighborhood as the route to the two towns of York and Chester, SC. While York Chester lost many of its earlier grand residences, most all of the homes built from the early 1900’s through the pre World War II period remain. Styles and sizes vary, ranging from Italianate, Queen Anne, Colonial, Georgian, Greek and Tudor Revivals to Prairie and Craftsman bungalows within York Chester’s approximate 40 block area. Hugh White, Sr., a prominent local architect who designed the Gastonia City Hall, High School and Public Library, also designed several of the homes in York Chester. Additionally the neighborhood is home to Gastonia’s only synagogue, Temple Emanuel, built in 1929, as well as the Holy Trinity Lutheran and Associated Reform Presbyterian churches, both built shortly after World War II.

In 1977, concerned residents saw the need to preserve and enhance the York Chester area and a picnic was held on the grounds of the original Gastonia High School to bring neighborhood residents together. From that, the York Chester Neighborhood Association was born and it began to lobby the city and state for a historic district designation. In 1988, York Chester was granted that status by the city becoming Gastonia’s first local historic district and at the same time was also recognized by the N.C. Historic Properties commission for its status. York Chester’s residents continued their efforts towards ensuring that the neighborhood’s history and preservation of architectural integrity was further enhanced, and in 2001 an application was filed with the National Register of Historic Places seeking national designation. A required and extensive study of the neighborhood’s structures and significance was undertaken in support of the application, and in 2005 York Chester became a National Historic District.

Today, York Chester continues to attract new residents from around the Charlotte area and indeed the country, both young and old, who are interested in living in an historic neighborhood. Many residents commute to work in Charlotte, which is only a short 25 minute drive to Uptown. Residents are drawn to the neighborhood by its unique variety of housing styles, friendly neighbors, streets shaded by 100 year old oak canopies and convenience to our downtown area, which itself is currently in the process of a strong revitalization. The York Chester National Historic District Neighborhood Association (YCNHDNA) sponsors several events, the largest of which is the biennial Home Tour in December. It’s an opportunity to visit many homes in the District, fully decorated for the holidays. Fall Fest and the Neighborhood Yard Sale are two other annual events that YCNHDNA sponsors. The Association recently undertook projects to enhance York Chester by installing street banners with the neighborhood’s oak tree logo and also replacing the signage at both the northern and southern entrances to York Chester with larger and more attractive designs. If you’ve not had a chance to visit us here in York Chester, please do – it's a great place to "Live. Work. Play. Visit."